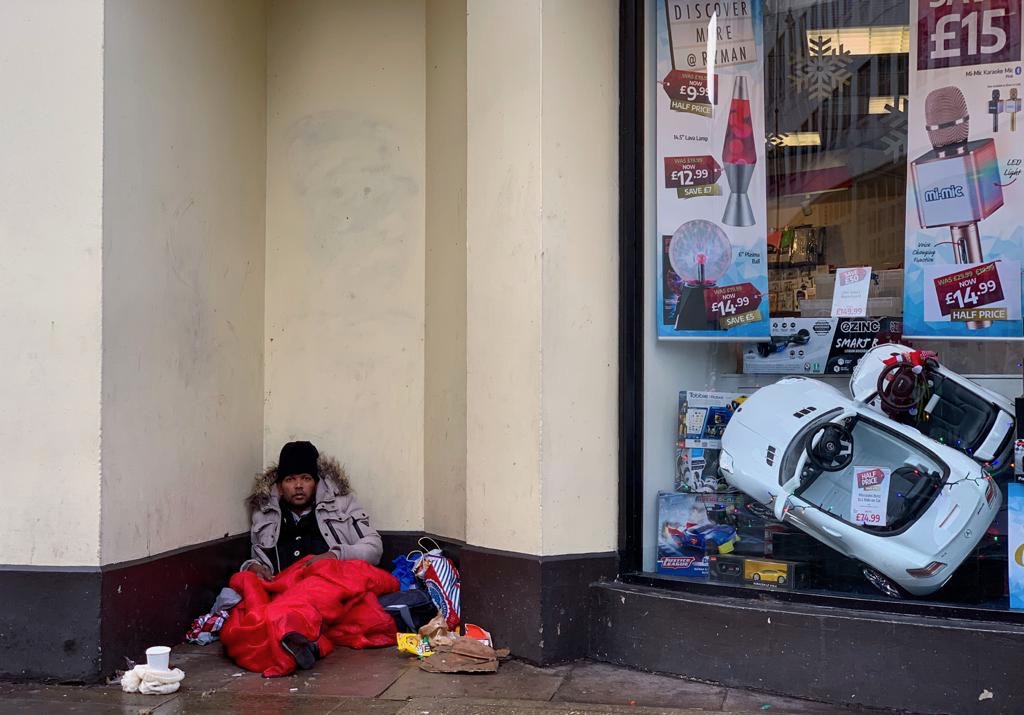 I’m in London. In the land, if not the city, of my birth. It’s Christmas – Oxford Street, Piccadilly and Mayfair all thoroughfares of bombastic light. Illuminated angels soar in orderly rows above the streets, a glitzy reminder of the religious roots of the consuming, commerce-driven frenzy below.

However, distracted by the decadence on display in the shop windows, unsuspecting shoppers may find themselves tripping over a vagrant, a homeless person, a there-but-for-the-grace-of-God-go-I kind of person. For they are everywhere. They sit on soggy squares of cardboard, paper cups – empty more often than not – clutched in hopeful hands or, more frequently, stood upright on the street in front of them, hands clasped around bent knees and heads hanging on chests.

Leaving Oxford Street in search of Charing Cross Station, we cross a wooden walkway covered with scaffolding. It’s raining and this stretch has more than its fair (fair?) share of rough sleepers. A man of Indian descent stretches out his cup to passers-by, brave enough to look them in the eye, obviously not yet worn down by the negligible number of people that give anything. Giving doesn’t structurally change anything of course. Goes without saying that we need more shelters, more (mental) healthcare and more social housing with accessible routes to get there for people who are down on their luck. But with Boris Johnson at the helm, when’s that likely to happen? And yes I know a lot of the money I drop into cups goes on beer, even heroin, but if that’s what’s needed to get through another day on the streets, I’d do it again.

We turn into the Strand. Hordes of shoppers emerge from the underground swinging pert, crisply creased carriers holding lightly folded merino, sparkly satin and blue, red and green suede shoes. (And yes, we bought clothes too.) A young guy is sitting on the ground, leaning against the railings at Trafalgar Square. Next to him a piece of cardboard bears the text: ’Ho-ho homeless!’ No-one seems to notice him, or his wry humour. Behind the large plate glass windows of an expensive restaurant, wine glasses stand in polished rows on starched tablecloths; waiters with black aprons and trimmed beards stand around, hands clasped behind their backs, waiting to serve.

Of course, it could be that the rich, altruistic owner of this restaurant invites the rough sleepers in for a meal now and then. Spends perhaps 1% of her profits on a free meal for them once a week; I don’t know, I don’t live in London. But I doubt it, at least not out of the goodness of her own heart. And that’s what I’m missing here. (Here, there and everywhere.) There but for the grace of God goes you chuck. What’s so Funny ‘bout Peace, Love and Understanding? (Elvis Costello). Wake up! Love More (Kate Tempest) Where’s our humanity? Our compassion? (Me.)

On the day of Boris Johnson’s election, asking a friend in the UK how the world ever got into the state it’s in now, she replied: ‘Billionaire bastards innit’. A trifle lacking in nuance but otherwise bang on. We turn into Charing Cross station. Half a dozen homeless people pitch small grubby tents and unroll sleeping bags, ready for lights out. Except the lights never go out in the city.