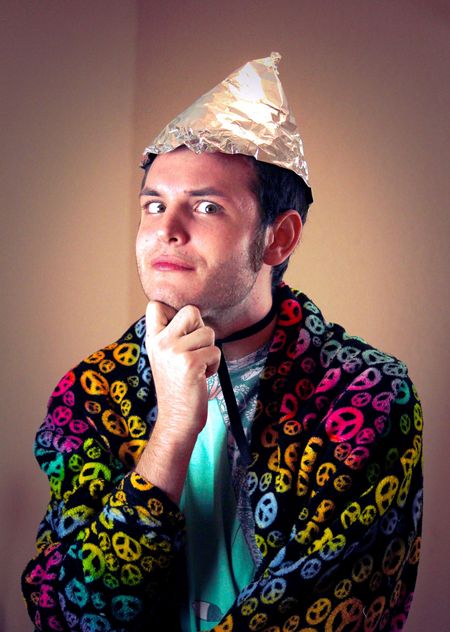 My son Seb (that’s not him in the photo) and two of his mates (also not) were denied access to one of their classes this week. The reason for this refusal? “Negative energy,” declared the teacher. “You three have got negative energy. I don’t want any of that in my class. Go and sit there till you’ve got rid of it.” He pointed to a bench in the aula. Rather taken aback, Seb and his teenage chums did as they were asked, but not, no doubt, without protest.

They sat there, Googling how to get rid of negative energy on their iPhones. Apparently, one of the best ways is to sit cross-legged with tinfoil over your head. In the absence of tinfoil, they decided their coats would do. So they sat in the spacious school aula, three baffled musketeers, cross-legged, possibly even emanating an Om or two, with their coats laid carefully over their heads. Halfway through the lesson, the teacher came out to check on them and declared them to be sitting in an aura of negative energy, still. They were again denied access to the learning environment and Seb, not taking this lying down (sic) challenged his teacher to explain his actions. What was the point of excluding them for half of the lesson? They had missed the explanation of that day’s exercise and would not be able to complete the homework. “If you’ve got negative energy you won’t be able to focus, so you wouldn’t have been able to concentrate anyway. I don’t want to waste my time teaching pupils who can’t learn.”

Seb persevered. He asked how the teacher knew that he had negative energy. “Well I saw the caretaker talking to you on your way over. That can only mean trouble. What was that all about?”
“Actually,” my son fessed up, proud and contrary. “She was congratulating me on finding my lost coat.”
“Oh, well in that case it must have been positive energy then. Come on in.”