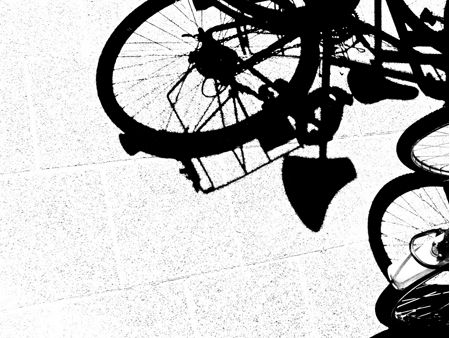 I’m cycling towards Café Langendijk, at the foot of the windmill at the end of the Sarphatistraat. It’s just after nine o’clock in the morning, a frosty morning, one of the first of the New Year. I’ve just dropped my son off at school and need a coffee, or two. As I head for the inviting glow of fairy lights behind steamed-up windows, I notice that last night’s snowfall still lies lightly on the trees, their black branches stabbing a rosy pink sky with spiky, arthritic fingers.

Mind you, this morning didn’t start off rosy, far from it. We were predictably late rising. It was, after all, only the second day back at school, and, after a week of pyjamas, DVDs and snowball fights, school-run stress hit hard. Especially when we discovered that my son’s gym bag was still at his Dad’s. We maneuvered our bikes out of the shed, our feet crunching on frozen snow, resisting the temptation to engage in another snowball fight. Luckily his Dad lives round the corner, but, pushed for time, we chose the dangerous option of getting there via a bike path on the wrong side of the road i.e. facing the oncoming traffic of wobbly Mums on bikes with small offspring perched behind handlebars, doing their best to stay on the narrow strip of bike path where the snow had been melted by previous cyclists. There was absolutely NO room for determined, forgetful cyclists like us going in the wrong direction in adamant pursuit of lost gym bags.
“Perhaps you could cycle over there,” suggested an oncoming Mum politely, gingerly balancing a toddler at the front and a six-year-old at the back.
“No, we can’t!” replied this stressed-out-school-run Mum. We retrieved the gym bag from his Dad’s and realized we would get to school on time after all. And that was when I noticed the pink sky. And the sparkles on the snow. And wished I could have found the wherewithal to have been polite.
“Sorry duck!” I shouted across the rooftops to the serene Mum who I hoped had made it to her school without an accident. And resolved to do it differently next time.