Use your noddles girlz 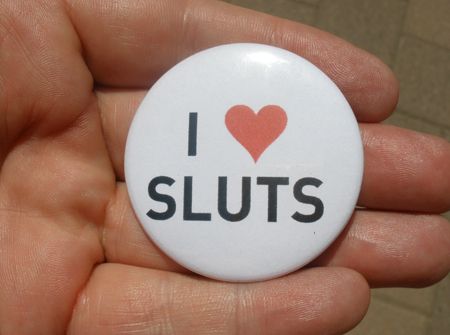 I am a slut. It’s official. I just read it in ‘The Guardian’. According to Katherine Whitehorn, that Sixties doyenne of wisdom and wit (and who my father had the hots for) a slut is, amongst other things, someone who digs around in the dirty laundry basket for a pair of knickers that aren’t too scuzzy to wear. Jeez, I go there at least once a fortnight. My son more often. (Can boys be sluts I wonder). Of course, my interest in the subject is prompted by this newish phenomenon of SlutWalking.

I was browsing through some old magazines at the Monday morning market yesterday, on the Noordermarkt in the Jordaan. They were all from the Sixties; one of them had a picture of my teen heroes The Monkees on the cover, another promised an interview with Country Joe and the Fish. I turned my attention to one bearing a photo of a well-barbered male sporting a sleeveless pullover. I can’t remember what the mag was called but its strap line read: A MAGAZINE FOR TEEN MEN ONLY. Its contents were disappointing. A woman next to me asked the stall owner the price of the mags. ‘Depends,’ said the blond thirty-something, smiling, ‘on whether it’s music or porn’. The woman laughed. ‘Did you see that on TV last night,’ she said, ‘that “slut walking”?’ The man raised his eyebrows in innocent enquiry. She went on to explain the phenomenon: women reclaiming the right to wear what they want whenever they want and not get blamed for inciting men to rape them.

SlutWalking began in January this year when a brave, if foolish, Canadian cop told a bunch of female law students that they should ‘avoid dressing like sluts in order not to be victimised’. Enraged women (and men) have been taking to the streets ever since. While I’m totally FOR freedom of expression, and totally FOR men taking responsibility for their actions and totally FOR respect, I’m also totally FOR women taking responsibility too. You ain’t going to change the fact that men like to have sex and that some of them find it difficult to control their urge to do so, especially when they’ve had a few – it just ain’t gonna happen, or at least not in my lifetime. Yes of course society should try and correct the behaviour of men, and women, who go beyond the pale, either by banging them up (woops, no distasteful pun intended) or therapizing them, and of course a huge percentage of rapes happen irrespective of what women are wearing, but hey, If I was to go out in high heels, low décolleté and short skirt (not likely now I’ve turned 50), I know full well what sort of attention I’d be likely to attract. And I’d make sure I had a change of clothes for when the pubs come out. It ain’t rocket science. Use your noddles girlz.