The thud of a falling Penguin 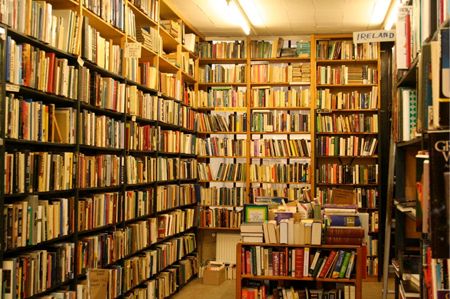 Well good heavens, it’s that time of year again. A friend of mine commented on my blogs this morning. I looked at them and realised it’s exactly a year since I started them – my first one details the snowy start of my son’s second day back at school. The third, Oh Blubber!, describes a visit to a small English bookshop in Amsterdam. When I was in there recently the owner told me that he’s struggling to survive what with Amazon and the advent of e-readers and all. Will browsing become a pleasure of the past I wondered? Surfing ‘Used Books’ on Amazon just isn’t the same somehow. No smells of dust, parchment or passing aftershave; no soft caresses of Shakespeare in leather, no chance encounters with pen and ink drawings from the Fifties or the thud of a falling Penguin. No, surfing is a decidedly single-sense experience and all the much poorer for it. And there’s no human interaction in an Amazon store either. OK, you’re not obliged to chat to bookstore owners, but you can. If you want.

I opened the newspaper this morning and discovered that there’s a documentary, now available on DVD, that mourns the decline of record stores: ‘I Need That Record! – The Death (or Possible Survival) of the Independent Record Store’. As well as going into the whys and wherefores of the (debated) decline, ex-customers talk about how important the stores were in their lives; many of them finally found recognition amongst those racks of vinyl in what had, up to then, been an alien world. The grimy shops were evidence of an aberrant culture sorely missing in many a community. And, as the film ‘High Fidelity’ showed us in full comic detail, they are full of human interaction. These days however we’d rather stream Spotify in isolation. And there aren’t many small supermarkets around either, for us to pop into when all we want is a carton of milk and a chat.

In a recent BBC Radio 4 programme about the social tsunami whipped up by the mobile phone, a woman compared sending a text to ringing a doorbell and then running away. It’s like we want to hide from each other, behind our Facebook pokes and Twitter tweets. I’m going to do something radical today. Make a phone call, invite the neighbour in for coffee. Maybe even smile at a stranger.