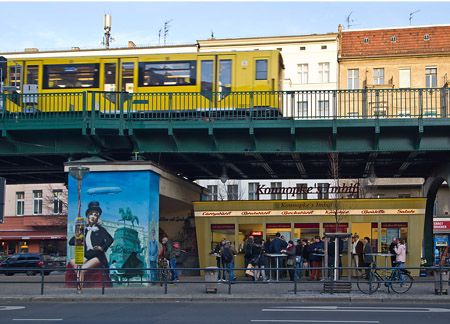 I was in Berlin recently for the first time and found it a depressing place – grey and full of big ugly buildings with huge distances between them, forcing us to take subterranean (U-Bahn) and semi-subterranean (S-Bahn) routes across the city, like curious, determined Bogeymen. Mind you, there were some uplifting moments: my son peering through a Donald Judd sculpture in the Hamburger Bahnhof and witnessing his reflection repeated a thousand-fold; eating cake and ice cream in the revolving restaurant at the top of the TV tower; and our nightly snack of ‘curry-worst’ in ‘Curry mit Biss’ where we watched the commuters come and go. But, to rephrase Johnny Jordaan, ‘Geef mij maar Amsterdam, Dat is mooier dan Berlijn’.

I was cycling along the Prinsengracht a few days ago, one of Amsterdam’s first real spring days (summer coat, no gloves) and was reminded of the reason I moved here in the first place: it’s just so pretty, or at least the Jordaan is. ‘Fluid’ was the word that sprang to mind. There’s the water, of course – the canals. But everything around them has such fluid lines too: swans with their long elegant necks gliding silently on the water, herons, with their lean and languid silhouettes, perched on the curved swell of a barge. There are arched bridges, tall and slender elms that line each side of every canal, and narrow, wonky, gabled houses topped with curlicue icing or the glaze of an onion-shaped dome. I curse Amsterdam city council daily for allowing the centre to become a fairground for tourists, alienating those who live here (the huge red and white plastic letters of Iamsterdam behind the Rijksmuseum perhaps its worst aberration) but at least its pretty heart is protected by the status of ‘official monument’. I reach my destination, the Theo Thijssen school where my intellectually hungry son attends special classes once a week. I pick him up and we discuss his lateral-thinking exercises on a wooden bench on the Egelantiersgracht. Four workmen in white paint-splattered overalls enjoy a coffee break in the afternoon sun, ducks scavenge for crumbs and freshly sprung daffodils cheer up an opposite houseboat. Not a tourist in sight.