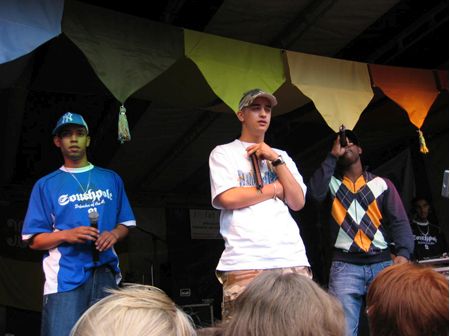 I was at the Uitmarkt recently, an annual event where dance companies, theatre groups, bands and orchestras all present their new repertoire to a mixed crowd on a scattering of stages in the centre of town. It’s free, and usually heaving, but on Saturday when we were there, an early downpour seemed to have put a lot of people off – and left a legacy of mud on the Museumplein.

I was there with my 25-year-old niece who was over from Manchester, and my ten-year-old son, whose main mission was to supplement his pocket money by returning empty beer glasses on which there was a deposit. Last year he bought a Swiss Army Knife with his earnings. He’s been whittling bows and arrows ever since. First off were Monks Avenue, a group of twenty-somethings from Eindhoven who belted out accomplished rock riffs. Their front man was a slick boyz-bander who cavorted around the stage in intimate interaction with his mic, reminiscent of Jagger. Next up were .nuClarity, advertised as ‘legendary hip-hop’. Regular crunksters they were, heavy on the verbal and the soul, the main man a passionate thirty-something with a flat cap, beer belly and soul patch.

Despite their legendary status they performed in a tiny tent with rugs and scatter cushions on the ground. My niece and son lay stretched out chillin’ while a small girl sat next to them, back to the stage, slowly unravelling the threads of a rug. But the headliners, the ones that Rollo was prepared to down his money-spinning activities for, were Ali B and Yes-R – two homegrown rappers oozing with charm and testosterone. They soon had the crowd jumping up and down, hands in the air, shouting “We’re the f**kin’ baas” (boss) in response to Ali’s instigatory, “Wie is hier de f**kin’ baas?” (Who’s the boss here?). My son shot me a glance to check that he could get away with this new behaviour. You go kid. Since then, Yes-R’s ‘Uit Elkaar’ has been played on average eight times a day and he has the words and the moves down to a T. That’d be Sweet-T.