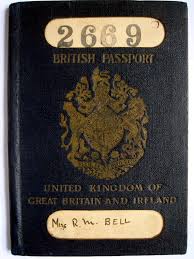 The current British government’s finally showing its true colours then. Last year, post-Brexit, it decided to change the colour of its citizens passports from burgundy to blue, remeniscent of the ones we all used to have that were hardcover and with little windows on the front for your name. Brexiters proudly declared the move would be a ‘powerful symbol of Britain’s restored sovereignty’.

So far, so innocuous (though a total waste of money). Now, in a step that is leaving everyone astounded by its irony, the government has decided to get these blue passports manufactured in France. A French-Dutch firm, Gemalto, has won the £490-million contract. Currently, the burgundy passports are manufactured in the UK, by a company called De La Rue (I know, French name, confusing), keeping a lot of people in Gateshead in useful employment, (in jobs that will probably be lost as a result of this weird decision.)

De La Rue chief executive Martin Sutherland has rightly challenged the prime minister or home secretary to come to his factory, “to explain to my dedicated workforce why they think it is a sensible decision to offshore the manufacture of a British icon”.

£490 million. That’s a lot of money. When I read about this in ‘The Guardian’, my first thoughts were of the money that wasn’t spent on the building checks that would, in all probability, have prevented the Grenfell fire (and of its victims, many of them still without permanent homes.) And of the money that isn’t spent on cutting the lengthy queues for lifesaving operations in the UK, or on raising the 27% of UK children who live below the poverty line, above it.

(Postscript: a day after I wrote the above, I learn that the passports will be £120m cheaper made in Europe, but for a government apparently so keen on symbolism, the irony remains. And, let’s face it, who really gives a toss about the colour of their passport?)